It's been a fairly quiet weekend. On Saturday I went out briefly in search of a New England Patriots baseball cap for Greg but they didn't have any in the mall, and after that I went shopping for some general 'groceries', making a point not to look at the meat aisle. In the evening Shaun and I went to 'The Parlour' pool hall for some food and naturally some pool. We were actually playing pretty well most of the time, but that's probably because of the fast tables and bucket sized pockets.

Sunday was the big day for me. Not only being my birthday (thanks for all the well wishes) but it was also the day I would get to see my first professional American football game! We had arranged to meet up with one of the guys from the office in downtown Seattle around 2pm, and we eventually met up with him down by the ground at around 3.30 after spending some time in Seattle and walking down to the ground. It turns out 3rd Avenue, as it serves most bus routes, it's home to a lot of vagrants and 'bums', where as 2nd Avenue is where most supporters would choose to walk. The contrast was quite strange, two roads no more than 50 yards apart having such a massive difference. So after walking a ways down 3rd, we rejoined the supporters on 2nd where the party was already starting. For some unknown reason, yesterday's game theme was 'Canada Day', so there was quite a presence of maple leaf flags leading up to, and in side the ground.

Before we were even 200 yards from the entrance to the Stadium grounds, we were walking by 'Tailgate Parties' which are apparently a regular occurrence. They're pretty impressive sites. Entirely organized by the fans; they drive all their cars, pickups and trailers (or motor homes) to a public parking lot, then they all sit about watching football on TVs, having barbeque's and drinking beers. 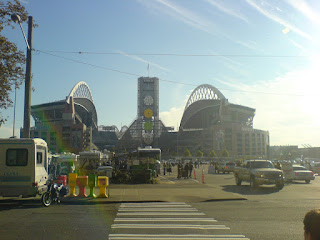 The Seahawks game didn't go too well yesterday; the 'worst team in the league' beating us somewhat convincingly 28-17. I guess all the sport this weekend could go our way, considering England Rugby reaching the World Cup Final twice on the trot. Still the game was a lot of fun. The atmosphere is one of the best in the NFL. The supporters are really loud, and cause the away side a lot of problems as they can't hear their own calls. Our seats weren't brilliant on paper, five rows from the back of the stadium at the very top. But the view was excellent. I don't think there's a bad seat in the house. We could see everything clearly, but I think it would be even better to get closer to the players!

Of course, no event post would be complete without one of my trademark panoramic photos! (I did ask everyone to stay still but they couldn't hear me).

Well it's back to work now. Only a few days left here so we'll see what happens. Speak to you all soon!