Snoqualmie... The place with the waterfall was called Snoqualmie. Thanks to Tim for this information. Then he made a joke about a casino.
Hello everyone. I guess I should say hello to everyone in my office who are all now reading this blog. Obviously I had to go through the whole blog to remove all the things about them :p

I guess today has been pretty exciting. I got in to work at silly o'clock this morning (again) as I had to ring my insurance company regarding my dentist appointment. Dianne made a reservation for me to go for a diagnostic appointment at a dentist Dave suggested. I went to that at 9am this morning and 30 minutes later I came out all fixed! So that was a success story :p

Joel and his wife, Mickey, brought Sydney (the baby) in to the office today for the company baby shower. Dave made ice cream (apparently it was good), Jess made some cupcakes and she and Dianne put together the rest of the baby shower. We all put some money in to a pot which went towards some dresses for Sydney and some vouchers for nappies etc. Was a fun event. Have thrown some pics in (copyright Joel/Sydney Telling). 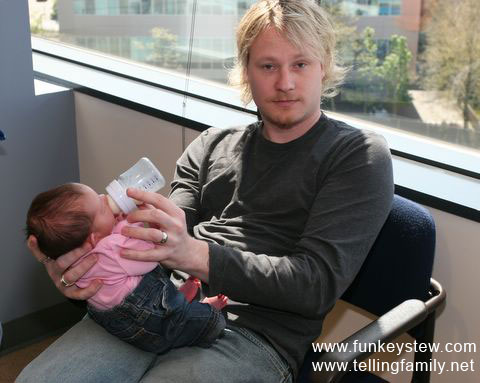 (Above: Will feeding Sydney)
(Below: Jess holding a very cute Sydney) 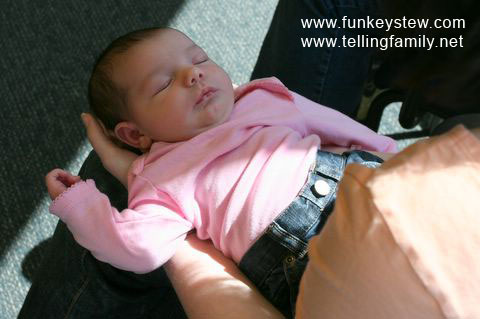 The extra fun part of today was that it was the first intern interview. I wrote a kick-ass programming question that I guess was pretty hard, but I think it prooves quite alot about the interviewee. So that went well, and we have another two tomorrow (Wednesday).

Later on in the day Kevin, Dave, Blaine, Linda and I went for a beer with an old colleague of everyones called Ron. He works for Google now(!). But we're back in the office now, and all the ice cream really has gone. I'm pretty disappointed :(

SPORT SECTION
Big news from Kendal FC website: "A lacklustre performance saw Kendal beaten 3–0 by a Spalding team desperate to avoid relegation." Come on Kendal, you can do better than that. One more win and they could be up! The Seattle Mariners baseball team managed to pull off a win despite throwing away a lead. First win for them in a looong while. Fulham won (we're on a roll) so I guess its not all bad news...

Check back tomorrow!
Posted by Kevin Park at 8:21 PM

I wasn't joking about the casino.

But it's going to be, like, five miles from the falls....