Out of the blue, Brian decided to go out for a drive in his covertable new mini. So we had a 'field' trip up to the mountains East of here. It was really good to see some of Americana as well as 'the great outdoors'. I managed to get some decent pictures, which I've included in this post. Unfortunatly I've forgotten the names of the places we went. But they were Native American names. It was the first day of spring weather so everyone had flooded out to the country side. So it was pretty busy but I can imagine it being packed during the summer. Anyway, on with the show!

Another Kevin Park trademark panoramic shot showing not-a-lot. There are people on the riocks down there to give you an idea of scale! 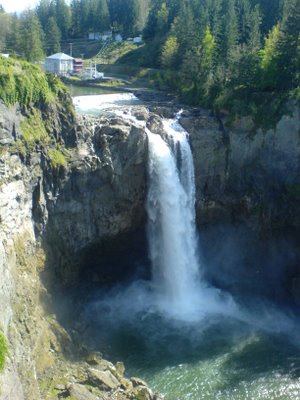 A nice big picture of the waterfall. During certain parts of the year the water gets so heavy it flows over the whol ledge, so this is relativly light... Apparently! 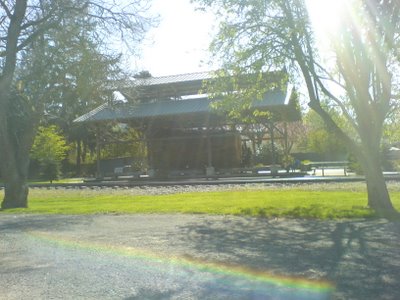 This is a little 'slice of Americana' as they call it. We went througha town witha population fo a few hundred. They had three gas stations between them though. But there was a train museum there (geeeeeek). This is a 'moving shot' taken from the car (god bless digital focus) of an old boggie (stop laughing, thats what they're called) carrying a bit of tree. The cedars in this area used to grow to massive hieghts back in the late 19th Century. Until the Brits and Germans figured they could be used for ship masts. This is a bit of tree that would be typically exported from the mountain area down to the docks along a very elaborate rail system. The rails still exist and run round the mountains and through a few. During the summer these tunnels are open for walks, but walking through them will require a few spare batteries for your maglite, cus theyre over a mile long and you can't see your hand in front of your face an 1/8th of the way down. This particular log has pins in the trunk showing dates of note like the declaration of independence. We didnt stop to see it though.

And hey, look I even got a video of the waterfall. Sorry it's short. But it's quite pretty. Enjoy!
Posted by Kevin Park at 1:11 PM

Say it with me: Snow-kwal-mee.

These falls are taller than Niagra, tho' I've never been to Niagra.

Enjoy it now: they're putting in a casino soon....