First off, I apologise for not posting for aaages. I tried posting last week but BlogSpot was down for the whole day nearly and by the time I think it came back up, I was already on a plane back to Heathrow.

Well my current situation is that I'm back in Holland. I got the BA 43o (0840 flight to Amsterdam) on Monday morning. Getting kind of used to that journey now. I had about 30 minutes to kill in Schipol before getting a train directly to Delft. It's a farely long journey, somewhere near an hour, but it wasn't really that bad. The train originally was heading for Leiden, where I would change to go to Den Haag HS, then a third train to Delft. Turns out all three trains were the same, so I didn't have to change trains at all!

When I arrived in Delft around 1pm, I was very pleased to see that it is actually a lovely city. Like Groningen, its a small city (No bigger than Kingston in size) but has a huge University. So the population is also of good proportions. I took some pictures today (a day after arriving) of some of the main sites near my hotel: 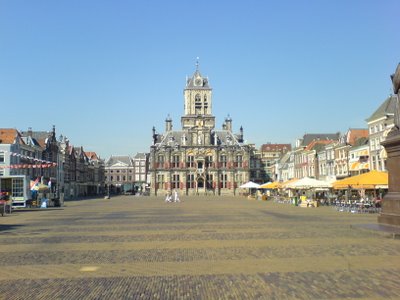 I walked from the station to my hotel using only my sense of direction and what memory I have of the map I found on the internet the day before. The hotel prided itself on sitting at the foot of a huge church. What they failed to mention was that there are several 'huge churches' in Delft. Thankfully, I recognised which huge church I was aiming for, and soon found the market and the hotel was visible from there! The hotel isn't a typical Travel-Inn business man coup that I was starting to get used to. This was very much the destination of choice for tourists looking for something simple between visiting churches by bike throughout Holland. It was an old fashioned guest house sort of place. In retrospect it was well priced. Very friendly staff and breakfast included in the price. All together I was very happy with it, although it was a little different.

I had a quick shower and got ready for my 'meeting' as it were due for 4pm. I left my 'apartment' at about 3pm and borrowed a Hotel bike and cycled to north Delft and found the building I was meeting in. I didn't have to stop once to check my map, I was quite impressed. I think it's just easy to get around in Holland.

My meeting went on for a few hours and then after some food, I cycled back to my hotel to do an evenings work and watch the football. In the process, I found that I am to be staying for two extra nights in Delft. Usual story. The typical oversights to this situation that no one but me will obviously know.acre about is that I have packed enough clothes and money to last ONE night... I am now here for three, so I don't know what I am expected to wear. I don't even have a wash kit and I need to shave.

To make matters worse, I woke up this morning to see if I could extend my stay a further night at least, only to find that it was fully booked, and so were several other hotels. I found a room available before I had to leave the Hotel De Emauspoort at 10.30 and went straight there (stopping for a few touristy photos). Along the way I passed the train station where I also found out the return ticket I bought back to Schipol (due for today) was not rebookable and had no face value. So that's 10 Euros well spent.

I got to the next Hotel (the Hotel Coen) at about 11am this morning. It's not really comprable as a hotel room like the Emauspoort, it's more like a room your great great aunty that you haven't seen in 15 years puts you in for a visit. It's mostly chintz. In fact it is all chintz. I can't complain though as it is quite comfortable and the service is very good, but it's less than easy on the eye. I saw two chairs in a the lounge downstairs earlier which I intend on taking a picture of as it will probably get a few laughs. Oh and my bathroom has those fake blue stain images on everything to make it look like authentic porcelain. Nice.

Either way, the Internet Access is free here, which is a darn sight better than the T-Zones I was using yesterday which I got stung on. T-Mobile must be laughing all the way to the bank with the money I needed for food.

On the money front, I'm going to have to ring up Natwest bank to clear my credit card (again) to pay for the room tomorrow. I seem to pick up endless chores to do whilst on trips.

Well that's a really long post as it is. I'll try and post again tomorrow but I really can't imagine anything exciting happening in that time.
Posted by Kevin Park at 5:13 AM

this was an exceptionally nice post. Taking a few minutes and actual effort to generate a really good article

If anything, I'm glad you chose Holland as your vacation spot. It's just way too chilling. But, what's not too chilling, is when an accounting student like me figured out just how expensive the state is through the analysis by the best accounting essay writing service by experts. But Holland's worth it, though.