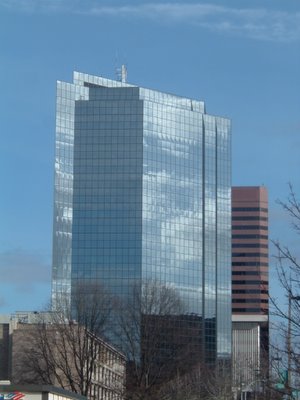 Hello. Skip the blue bit if you don't like football etc.

I'd like to say we were robbed outright but we didn't capitalize on field goals and clock management. The referees only found one penalty against the Steelers and managed to find some ridiculous calls against us. It has to be said the officiating was really bad, and made the game unenjoyable. Our offense played well and marched the field well, and the defense held the Steelers well. They got a few lucky breaks which we should have recovered from but didn't, and when we did we got flagged for it. Theories suggest the umpire flags had Terrible Towel written on them.

Ok, that's over and done with now. Nothing happening in the NFL till the new Season starts in the Autumn.

I had a pretty eventful weekend. We didnt go out drinking on Friday, probably for the best. Instead Dave, Blaine and I sat in the office till late in the evening just chatting. On Saturday I rang home and then went in to the office. The weather was pretty strong. We had near hurricane winds and horrible showers. I got in to the office just before 12 and met up with Blaine. Mahyar was moving in to his office as he just got back from India. Me and Blaine headed off to throw a football about. We decided to do some sight seeing whilst we were at it and I got to see downtown Seattle which was nice. Not alot to see though. We stopped for lunch in an American Italian resteraunt and then went to go throw the ball about. We went up to the University of Washington sports centre. Which in comparison is about the size of Hull university campus. We wandered in to their 80,000 capacity football stadium and started playing on their expensive synthetic turf. Which apparently is completely ok. It was pretty daunting standing in that stadium. I'd love to go to a Huskies game if I come back in the right time of the year. And it was alot of fun playing on their field. The wind was so strong though that it swung the ball out so far I couldnt catch most of Blaines wind assisted 50 yarders. Honestly it was the wind.

Sunday was obviously Super sunday. I didn't do anything in the morning. I went out for a Fatburger (again) and picked up some drinks (non aloholic) from Safeway. Apparently Safeways are owned by Mormans here. At 2pm I booked a cab over to the steel pig. Watched the game there and soaked up the atmosphere. Afterwards a gang of about 6 of us went to Kevs house were we drank some more and played Dance revolution. I got a cab back to the hotel and it was only 9pm! Felt like I was out all night. Watched Family Guy on Cartoon Network (no new episodes I dont think) and was asleep by 10.30.

Nothings happened this morning. A new guy called Brent has started and I may have to help him out on Unit Testing over the next two days. We'll see how that goes.

I should get a new Laptop this week. It's being delivered to the Richmond office.

I better get going. I'll post again if I think of anything interesting!